Xbox One TV Tuner Functionality Now Available in the US

Xbox One TV Tuner Functionality Now Available in the US 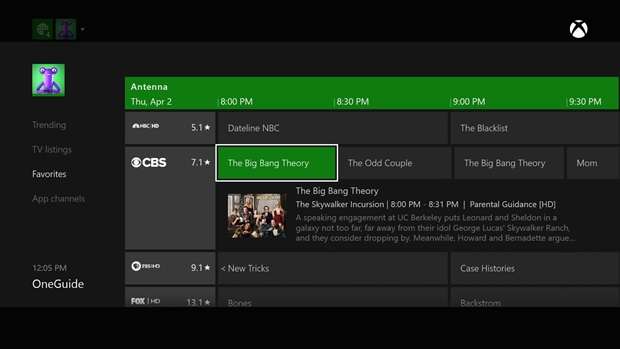 Xbox One gets its official over-the-air tuner today, available in a $99.99 bundle

Xbox One owners in the U.S. and Canada can now watch over-the-air TV on their consoles, according to an Xbox Wire post.

To watch broadcast TV, you’ll need the $59.99 Hauppauge Digital TV Tuner for Xbox One, which is AVAILABLE at Amazon and the Microsoft Store. You’ll also need an antenna, which isn’t included with the tuner. The MICROSOFT Store is offering a $99.99 bundle that includes an antenna that connects to the included tuner. MICROSOFT says the bundle saves buyers $30. You can also buy an antenna separately or use one that you already have.

Microsoft announced over-the-air TV for Xbox One in April. The tuner allows users to watch local affiliates like CBS, FOX, NBC and PBS live. On the software side, the Xbox One’s OneGuide will include your TV listings. Users will be able to pause LIVE TV for up to 30 minutes and stream it over the air to the SmartGlass apps on Android, iOS, Windows PC and Windows Phone.

SUPPORT for over-the-air TV on Xbox One means you can access broadcast networks available in your area, subscription free, and, in true Xbox One fashion, without having to worry about switching inputs between your games and TV,” the post reads.

How to Setup the Hauppauge WinTV-955Q with Xbox One

We setup the Hauppauge WinTV-955Q with the Xbox One to watch live TV over-the-air.

Microsoft has announced over-the-air TV tuner support for Xbox One, which is now available for those currently involved in the preview program.